OwnerListens sat down for a Q&A session with Shoshana Wolff Co-Owner, Wine Director, and General Manager of All Spice in San Mateo, CA to learn more about what’s behind this fabulous destination.

Along with her husband, Sachin Chopra, Co-Owner and Executive Chef, Shoshana and Sachin turned a 1906 Victorian house into a “pioneering dining destination that showcases evocative New American Cuisine”. Michelin-starred serving customers for almost 3 years, All Spice has responded to 100% of customer feedback sent through OwnerListens. Read what we learned in our Q and A for this Owner Spotlight!

What do you like most about being a restaurant owner?

I love that this is my own thing. I’m able to bring people in, treat them like my guests, and they’re in my own home. I love making people happy.

Can you describe your opening night at All Spice?

Opening day was so crazy, we were not sure what to expect. We were on OpenTable and so we had, like, 3 reservations for evening. The first family came in and we were so nervous. People showed up right at 5:30 and they had great things to say; they were immediately excited about what were doing and it was very motivating.

Do you remember the first feedback you every received from a customer?

We had these wavy shaped plates and were serving our main courses on them. The plate was ruffled so if you put your knife on a high spot, it would slide down to the low spot and because it would have momentum, it would just slide right onto the ground … So there was a lot of noise of silver hitting the ground the first few nights and the first thing people said was, “Everything was so great, but you got to use a different plate!”

Did you change the plates after that?

Yeah, we now use those plates for desserts and salads and things, but for meat we got different plates.

Sounds like it could be a nice dessert plate…

Yeah they are so beautiful. They are great as long as you don’t need a knife.

What do you value most about receiving customer feedback?

It helps give me an outside perspective on what I’m doing. I’m just so in it every day that I really appreciate being able to see it through somebody else’s eyes. It’s a little bit humbling too, it helps you to not trust your taste entirely, to realize that there are other people who have good ideas for how to make your business run.

What do you like most about receiving customer feedback directly through OwnerListens, as opposed to public/online channels such as Yelp?

What’s the best feedback you have ever received?

The wavy plate thing was definitely good … but for example, I had a customer who came in early in the evening, and later in the evening we had a new special available that we didn’t have when they sat down. So they heard the servers talking about it to other people, it felt like we had just not bothered to tell them about it. That would never be a thing I would consider but, you know, it’s something you either have to make clear in some way, like “we have this NEW special the chef just made”, or you have to serve it to everybody, or not serve it all that night. It definitely helped me change the way I thought about that aspect of service.

So your husband Sachin is Co-Owner and Executive Chef of All Spice, what’s is it like working with your husband?

Well, I have to say I was really nervous about getting into this with him because we weren’t sure how it was going to work out. But we just really have each other’s backs; I feel like I can trust him completely, and he can trust me, and a lot of the drama that tends to come out in restaurants we don’t have because we are a unit.

What has been your greatest challenge here at All Spice?

Personally, the hardest thing for me has been managing people. This is my first experience having my own staff and, luckily, I have this really great group of people. It’s not something I would have considered being such a big part of opening a restaurant, but it’s huge: Managing people is what this is all about.

For the restaurant, I think the hardest thing for us to overcome has been people’s expectations. When they hear that it’s an Indian Chef, they specifically have an idea of what the food is supposed to be like. But, you know, he’s doing it from his heart .. it isn’t Indian, and it’s not going to be like anything they’ve ever had before. Most people absolutely embrace it once they have tried it but it’s hard for people to categorize us. 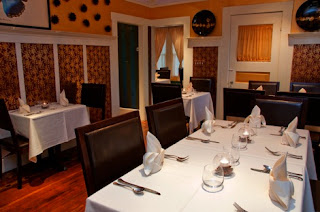 All Spice has been around for almost 3 years, has been very successful, and even garnered a Michelin star right out the gate. What would be your one piece of advice to aspiring restaurant owners?

Be conservative about how you think about your business and in your planning. Project things in a way so you can live up to the promises you make to yourself, otherwise it’s going to be really disappointing.